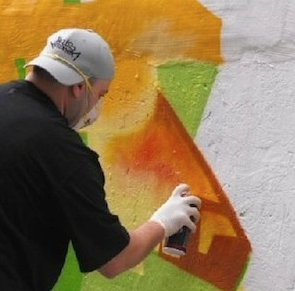 Roz One was born and raised in Hell’s Kitchen NY and started writing graffiti in 1978. He was schooled by mentor, Mr Mace.TC and influenced by old school writers before him.

Growing up, his neighborhood nickname was KoolCat, but in 1978 while reading a book, he came across the name Roz. The letter combination was intriguing. He added one and started tagging RozOne. Over the years, other names have been used hear, Sizzle144, Kidnap134, 2Close and Letterman.

“My first real crew was TSF, Stan1 ran the 1 tunnel before he got locked up. I can remember being there watching TSF, FBA TC5, TVS and BB crew doing whole cars, end to ends and window downs. I remember how they vamped toys and work bums. As a young kid, that was an amazing time in graffiti, but now graffiti today is way too easy.”

During his career, Roz schooled and teamed up with many a writer before they became big time, such as Jon-one156, his true bombing partner. Roz pieced quite a bit but never had an abundance of paint, so he never left home without a marker. He made his way tagging and bombing insides with crazy drips; going all city. He rocked lines like 1,2,3,4,5,6,7, A’s,C’s,B’s, LL’s,R,N,M,J and E.

A member of TC5since the legendary times of the Roxy night club, where he met hip hop and graffiti artists such as Juice, Frosty Freeze, Seen, Doze, Poke, Epic, Woody, Dontay, Psycho and Revon to name a few.

Back in the 1980s, Seen wasn’t too anxious to put white writers down with the 5, but thanks to Juice, Seen changed his mind. Rozone became the first caucasian down with the crew.

In 1985, Roz would stop his graffiti career only to get involved in some real street drama. Looking back, he is amazed how far graffiti has and regrets that he never took pictures of his subway work. Today, he is very humble. He has his own clothing line “Hells Kitchen Gear” located on 48th and 9th Ave in Manhattan.