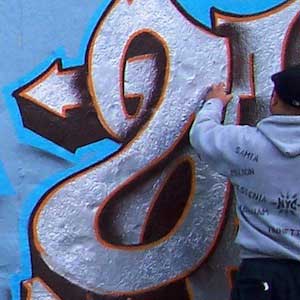 OAS was raised in Washington Heights and started writing in the late 1980s. His influences came out of his own neighborhood, where there were many active writers and bombers hitting the streets, some even going in tunnels and all city.

On a handball mission to City College, he saw a line of writers doing a crew production. That is when his interest went from writing to piecing.

He came up with the name OAS in 1991 and a couple of years later met some of the writers that were influential to his evolution of becoming an artist, such as Gets, Jel, Psycho and Kerz.

A late addition to the TC5 crew, OAS brings fresh new blood into an already established group of writers and hopes to continue on with the classic legacy that is TC5.