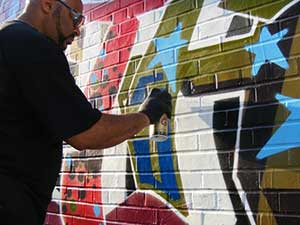 The Doc you all know, didn’t exist until 1984… the journey began in 1977, with KC one. They spent the entire year street bombing and painting handball courts. Then, KC one left to get busy on trains. Doc had no intention of ever painting trains, despite his partner’s constant requests. It wasn’t until the first week of high school in 1978, when KC showed Doc tags of another writer named Doc 2, from the “J” line. KC one played Doc against his ego and told him that he would have to write another name if he didn’t start hitting trains immediately. Thus began his train odyssey, but to become the artist you know today, Doc partnered up with many artists like Beam one, Web one, Abby one, Magoo 2, Staf 27 and Doze… and it couldn’t hurt getting befriended by Dondi.

“My TC5 career started in late 1983. I was so amazed at the work seen and doze were doing at the time and the buzz they had in art & design high school, that i actively sought them out. I finally met doze at the Roxy”s night club. We quickly hit it off and he put me down early 1984. Around this time, seen and juice had moved to Rhode Island, but by the end of the year they were back and not to happy with the amount of people doze added to the crew. So all new recruits were kicked out and instructed to meet at Rock Steady Park to state their case. After reviewing my black-books and photo album, Seen made me a Vice Prez and allowed me to assemble the squad that rocked the IRT’s for a decade.”

In this modern era, Doc has devoted himself to traveling the globe, mastering letter design and working under the title – style scientist chemist…for obvious reasons.

Peace from the alphabet re-animator and builder.