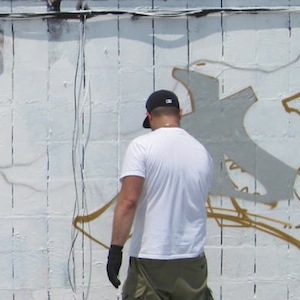 A graffiti writer specializing in the fine craft of hand lettering. He has long been considered one of New York City’s premiere stylists.

Born in Washington Heights section of Manhattan to Cuban immigrant parents, he has been active in the graffiti and hip hop scenes since the early 1980s. His crew FC (Fame City) is recognized as a major force of their generation and set a standard that today’s style writers are still striving to achieve.
Many years ago, he began to notice a disturbing trend in graffiti’s global landscape; writers were losing their focus on the foundation of the culture. Realizing that history was in peril, Dash made a conscious and uncompromising  stand for the preservation of subway graffiti and it’s true aesthetic. His success in translating the letter forms that were passed down from master to apprentice earned him great acclaim and a cult following. Merging the traditional with the contemporary, his distinct style has served as a lingua franca that resonates with writers of all generations, helping to ensure that New York City’s legacy will not fade into obscurity.

Dash’s work on the street is very compelling and has been widely imitated. His pieces are legible, dynamic and highly polished. Each letter is elegantly poised and carefully juxtaposed into a creative composition. The lines are always confident and executed with precision. Often accompanied by a classic b-boy character and a graphic background, his paintings convey the energy of an era long since passed, when graffiti was at it’s apex.
Check out www.dashonefc.com for more